Canada's education system is considered one of the best in the world. Ontario attracts the majority of overseas students from all over the world because of its world class universities, safe and beautiful environment, and its very fair student evaluation system. Well designed programs help every student with different interests to succeed - compared to the uniformed style in other countries such as China.

Starting from Grade 9, the schools offer a wide range of courses to meet the various needs and interests of students preparing for their future academic and career development. On top of the 18 compulsory credit courses, an additional 12 optional credit courses can be chosen from in different area of interests at different focus levels (University Preparation, College Preparation, and Career Preparation).

To obtain admission to a Canada University, you need the following
1. 6 credits at the grade 12 level (4U or 4M);
2. Language Test (TOEFL/IELTS) or ENG4U; Why Study in Canada?

This is one of the reasons that the United Nations Quality of Life Index has consistently ranked Canada as the top 2 countries to live in;

• Multicultural Society and a high standard of living

• Potential for work and immigration

• Qualifications Valued Around the World

• Research and development conducted at universities in Canada has one of the highest rates among OECD and G8 countries.

• Canada has consistently ranked among the top 10 countries in the United Nations Quality of Life Index since 2004.

• Canadian students are top performers in Reading, Literacy, Math and Sciences, and Number 1 among English speaking countries according to the OECD Better Life Index (2011).

• Canada is among the top 3 Organization for Economic Co-operation and Development (OECD) countries in spending per capita on public postsecondary education.

• Canada's educational institutions have long been incubators for innovation. The BlackBerry, flat screen technology, SMART boards, voice compression applications for cell phones and computers, and IMAX film are among the many revolutionary technologies invented and developed by men and women who studied in Canada.

• Canada is the home of world-class collaborative research and development. Projects include the innovative NEPTUNE ocean floor laboratory, the Canadian HIV Vaccine Initiative, ArcticNet, a revolutionary approach for studying the effects of climate change, and Canada's Advanced Research and Innovation Network (CANARIE Inc.) which facilitates research and development around the world. 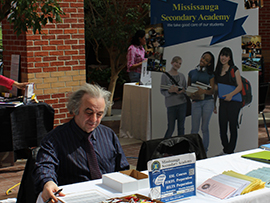